The singularity of the painting of Gerard Torres Sanmartí (Sabadell, 1987) lies in the artist’s
view of painting as a broad and heterogeneous dynamic in which different artistic languages and processes inherent in the construction of the work – which may even be mutually contradictory – all have their place and consideration. Torres is as interested in deeply-thought-out analysis of painting as in its aesthetic and spontaneous expressiveness; in the depth of the error as in the resounding nature of painting’s communication; in the reproducible power of art as in its
quintessential originality.

The work we are showing at the Arranz-Bravo Foundation – expressive, residual painting, made from waste and leftovers from the painting process – is only the painterly stage in what comprises a general and more complex study of Torres’ artistic work that, impressed by his intense and indeterminate aesthetic, we suggested that the artist and curator, Joan Vila i Boix, might usefully explore. Because we believe that it is when Gerard focuses on working with the waste from painting, with
errors, accidents, leftovers and detritus that he achieves his greatest artistic power. It has what Byung Chul Han would call a negative view of art and thought. It is not a question of affirming or denying painting, but of embracing a negative side that finds interest in the reverse of dumbed-down or analytical painting: rather than affirming without question or speculatively, suggesting indeterminately; rather than prioritising the surface of colour, focusing on the ineffable depths of matter and gesture.

Gerard Torres seeks to go beyond Aballí’s anti-painting, for he also takes into account the work in its aesthetic state, as well as its formal expressiveness. In other words, painting as a dynamic whole, like nature itself. 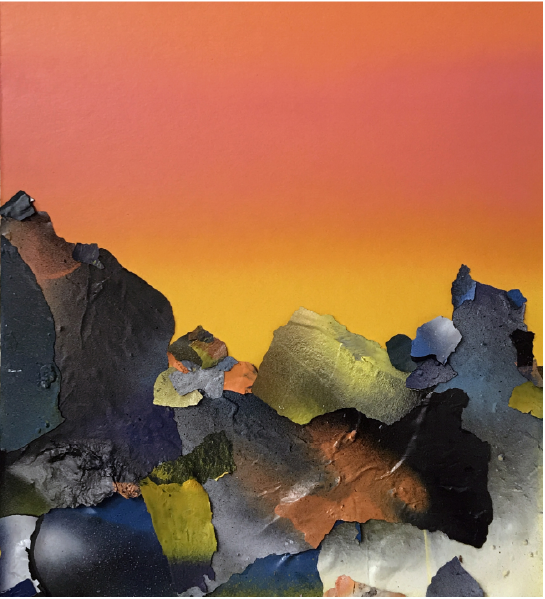